I considered beginning this article with some variation of “there is a war going on within conservatism”. I wrote about the issue just the other day. However, that is not quite accurate. The war is long over, the occupation is well underway and reeducation is progressing quite nicely, thank you. Those of us with counterviews were defeated long ago. I can recall when such a war raged. Famously, Jaffa vs. DiLorenzo and most recently, to some degree, French vs. Ahmari.

More recently—that is, chiefly since the 1950s—Locke has been apotheosized by disciples of Leo Strauss, an amiable and learned professor of politics, strongly influenced by Greek philosophy. Less learned and less amiable than their master, many of the latter-day Straussites demand ideological conformity to a “Lockian interpretation” of the Constitution and of American history and politics generally. That interpretation, though sometimes called “conservative” (as indeed Professor Strauss was personally), is bound up with secularistic and egalitarian assumptions. This adulation of Locke (or rather of a fancied Locke who did not exist), erected into a dogma, is the more curious in view of Strauss’s chapter “Modern Natural Right” in his book Natural Right and History, in which Strauss argues that Locke was powerfully influenced by the thought of Thomas Hobbes—that ‘presumptuous little upstart” (T.S. Eliot’s phrase) whom Strauss did not love. But consistency is a jewel. In the 1950s and 1960s, though, Kirk had nothing but praise for Leo Strauss as a person and as a scholar, in both his published works and in his private letters. Kirk also seems to have been taken with Strauss’s students. –The Conservative Constitution

In the realm of ideas, the broad divide between these views that Kirk came to realize, were pronounced and tangible.  This began in the 1980s but took flight in the next decade. A rising paleoconservative minority, encouraged by Patrick J. Buchannan’s 1992 Cultural War speech, began to write speak and coalesce around the principles of the Old Right. Ideas carried forward in the person of Kirk, ideas that diverged in the students of Strauss.

This debate ended, for a bit, in the 2002 DiLorenzo vs. Jaffa debate. No matter your opinion of who won that debate, the reality of geopolitics, rising nationalism and dominance by neoconservatives essentially stymied further conflict. The paleoconservative movement took a principled stand against endless and expanding war. Straussians and their cousin neoconservatives were ascendant.

One must then wonder, why then, do the Straussians continue to publish pieces such as one that just appeared in Providence? Alexandra Nieuwsma published a piece entitled, The Other Side of the Penny: Considering Abraham Lincoln’s Legacy. There is nothing original in this article, it a story often told. To paraphrase, there is an obligatory recognition he freed the slaves; one of the points that DiLorenzo argued was never his intention, concern nor even something he practically did. His Emancipation Proclamation was as much of a diplomatic document as anything else; intended to dissuade Britain from considering aiding the Confederacy. These sorts of articles simply must begin with this overstated claim.

Another standard aspect of pieces like this is a great number of words devoted mid-article to explaining away acts such as imprisoning dissenting newspaper editors and the suspension of habeas corpus.  Nieuwsma argues that “an honest assessment must admit Lincoln is superficially inconsistent, this does not mean he is substantially incoherent.” She goes on to provide four points that she believes prove that Lincoln was not incoherent. Points that themselves do not cohere with the stated views of many of the Framers.

This always builds to a predictable crescendo; Lincoln was enacting the intent of the Framers, giving legal status to the Declaration and all the Lockean concepts contained therein. In summary, Lincoln did bad things, broke the law, exceeded executive power, denied Americans liberty, confiscated property without compensation and essentially ignored the Constitution – all because he was good and for liberty and the Constitution. It is a preposterous argument. It does not cohere.

To be fair to Nieuwsma, she does not end her article with the typical narrative. She does not make the next reach, typical of these pieces, that generally proclaims something to the effect that we need to expand the principles of equality and liberty that Lincoln made war to advocate to the rest of the world. She ends with an argument that we might never again be able to trust another president with the power Lincoln wielded. The most tragic flaw of her piece, not unique to her, is her failure to see the incoherence of justifying what can rightly be termed as tyranny in the defense of liberty.

Just because she did not make the reach does not mean it is not there. Two days before her article, Providence published a video from their Christianity and National Security Conference. The video is of a speech by Nicole Bibbins Sedaca entitled, How Christians Should Respond to the Global Decline in Democracy. It should be obvious, should be, to any Christian that concern for with global democracy has nothing to do with Christianity, it is foolish to even discuss exporting democracy as part of the National Security Policy – and that should be obvious no matter if one claims a religion or not. US policies all over the world, and in the Middle East particularly, have proven that foisting democracy on a nation that has no cultural or historical basis for democracy is foolish; it ends poorly. 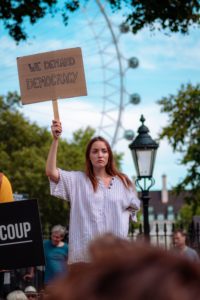 Before the great democratic experiment in the Middle East, ancient communities of Christians lived side by side with Muslims. Consider, “[p]ervasive persecution of Christians, sometimes amounting to genocide, is ongoing in parts of the Middle East, and has prompted an exodus in the past two decades, according to a report commissioned by the British foreign secretary, Jeremy Hunt.”(Guardian) This is the result of exporting democracy to cultures and people that had no cultural or historical foundation to support or embrace it. Perhaps Christians should be asking what is so Christian about Democracy? If we take Nieuwsma at her word, Lincoln made war for his idea of democracy. The US spent most of the last twenty years fighting to export and make stick democracy in faraway places. That seems a bit illiberal, totalitarian and even war-like to me, not a Christian perspective.

Why is this divide of principles, that began in earnest with the students of Strauss, still a battle? One could count on their fingers and toes the number of true conservatives that write about the counterview? The revisionists have won; there is no more real debate. So, why do Straussians still expend digital paper to regurgitate the false narrative that all the framers were Lockean, spreading democracy is God’s will and our manifest destiny? Simple, their historical narrative does not cohere, many unsuspecting people repeat parts of it, but upon analysis it never holds. They must continue to repeat it if they ever hope to drive policy toward their classical liberal perspective. God help us.

I am a Southerner, a father, husband, and Christian and retired active duty Army field grade officer; I served for just over thirty years. I spent four years of my youth at The Citadel in Charleston. I am neither a theologian nor a professional historian. I do however ask many questions and endeavor to find answers and I believe, or at least hope, that I think critically and with the understanding that God provides.