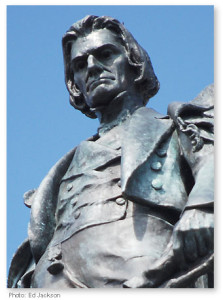 John C. Calhoun is best remembered for advancing the concept of minority rights in politics, which he did in the context of defending Southern interests from Northern threats. He began his political career as a nationalist and modernizer. He demonstrated the optimism and hope that often manifest strongest in youth.  As a member of the first generation to live under the new compact, sealed with the ratification of the Constitution in 1787-1790, Calhoun acted and stood by the notion that national pride and identity were tied to the concept of union, modernization and cooperation. By the 1820s, his views evolved as he began to understand the competing interest of two dissimilar sections and organic nationhood in the context of the cause and welfare of the Southern people and Southern States.  Calhoun became a political realist and a pragmatist.  As a result, he became a leading proponent of states’ rights, limited government, nullification, and opposition to high tariffs—he saw Northern acceptance of these policies as the only way to keep the South in the Union. His beliefs and warnings heavily influenced the South’s secession from the Union in 1860–1861. [1]

Many historians wrongly view Calhoun’s evolution of views as inconsistent.  They point out that he supported war in 1811-12 but warned against war.  He supported tariffs in 1816 but opposed them as oppressive in 1828.  Such a view fails to address the larger environment.   The Federal government and the compact of Union occurred less than 30 years prior to Calhoun’s support of the War of 1812 and the tariff of 1816.   His initial optimism and hope for the new union were shared generally by most of the country.  It is not unrelated that his early views came during the period called the Era of Good Feelings, where exuberance, optimism and nationalism were prevalent throughout the young nation.

By the mid-1820’s the reality that the Northern and Southern sections of the United States were very different became obvious.  These sections had been settled by essentially different peoples.  They were culturally and religiously distinct and spoke different dialects of the English language and often used different orthography.  By the second decade of the 1800’s the economic interest of the two sections had diverged drastically.  In a very real sense, and by any standard definition of the word the two sections had emerged as separate nation groups under a federal republic. [2]  Calhoun was not inconsistent when comparing his earlier views with his later. He had merely come to realize the reality of the cultural and political dynamic and turned his nationalism from that of a nebulous and nonexistent whole to the more realistic view of two entities existing under one compact, his loyalty remained throughout with his nation.

By any reasonable estimation, John C. Calhoun must be considered one of the greatest political theorist to ever hold political office in the United States.  His contributions and advocacy for union and modernization in the early 1800’s played a significant role in forming the United States as it exists today.  His theories of republicanism and federalism represent workable solutions to modern problems of governments that have grown too large to scale.  In 1957, a Senate Committee headed by Senator John F. Kennedy selected Calhoun as one of the five greatest United States Senators of all time. [3]

John Caldwell Calhoun was born on March 18, 1782, near Long Canes Creek, an area later known as the Abbeville District, located in present-day McCormick County, South Carolina. His parents, Patrick and Martha Caldwell Calhoun, were of Scotch-Irish ancestry. [4][5]   Calhoun’s family was originally from Dumbarton, Scotland.  The family name was previously spelled, Colquhoun. [6] [7] The family immigrated to Pennsylvania during the 1730s and moved steadily southward until 1756 when Patrick reached the South Carolina backcountry. One of the most prosperous planters in his district, Patrick Calhoun was a leader in local politics; he served in the South Carolina legislature from 1768 to 1774. During the late 1760s, he was a Regulator, one of the self-appointed vigilantes whose well-intentioned but rough efforts to impose justice on a crime-racked frontier wholly lacking in judicial institutions finally prompted the South Carolina legislature to establish circuit courts in the backcountry. During the Revolution, he sided with the patriot cause. [8]

He received only a sporadic education during his early years, attending a “field school” for a few months each year. In 1795, he entered a private academy in Appling, Georgia, but the school closed after a few months. The boy plunged into an exhausting course of self-study, but his father’s death soon forced him to return to Abbeville to manage the family farm. The disappointed young scholar remained at home until 1800, when his mother and brothers, having recognized his formidable intellectual abilities, returned him to the academy, which had since reopened. He was a diligent student, qualifying for admission to Yale College in 1802.

Calhoun completed his studies at Yale in 1804. After graduation, he spent a month at the Newport, Rhode Island, summer retreat of Floride Bonneau Colhoun. Mrs. Colhoun was the widow of the future vice president’s cousin, Senator John Ewing Colhoun; her daughter, also named Floride, was attractive, well-connected in South Carolina lowcountry circles, and socially accomplished. John C. Calhoun married his young cousin in 1811. [9] The union conferred wealth and social prestige on the earnest young upcountry lawyer, but Calhoun was also attracted to Floride’s “beauty of mind . . . soft and sweet disposition,” and “amiable and lovable character. “Not until later would he experience her stubborn will and unwavering sense of moral rectitude, so like his own. [10]

Calhoun began his legal education in 1804 soon after leaving Newport, studying first in Charleston and later at the Litchfield, Connecticut, school of Tapping Reeve, a distinguished scholar who counted among his former students such notables as James Madison and Aaron Burr. He returned to South Carolina in 1806 and served brief apprenticeships at Charleston and Abbeville. He was admitted to the bar in Abbeville in 1807.

In the summer of 1807, he helped organize a town meeting to protest the British attack on the American vessel Chesapeake off the Virginia coast. His speech recommending an embargo and an enhanced defense posture electrified the militantly nationalistic crowd assembled at the Abbeville courthouse, winning him immediate acclaim. [13]

Calhoun was raised Calvinist but was attracted to Southern varieties of Unitarianism of the sort that influenced Jefferson. Southern Unitarianism was generally less organized than the variety popular in New England. [14] He was generally not outspoken about his religious beliefs. After his marriage, Calhoun and his wife attended the Episcopal Church, of which she was a member. [15] He was a founding member of All Souls Unitarian Church in Washington, D.C. in 1821. [16]

This takes us essentially to the beginning of Calhoun’s political career and paints a picture of who the man was outside of speeches, debates, writings and historical revisionist misrepresentations.  He was articulate, intelligent, hard-working, diligent, displayed no apparent moral vices (he had enough enemies, such if they existed would not have been hidden long), thought big thoughts and was never afraid to compromise temporary position for what he saw as a long-term good.

Dr. Clyde N. Wilson, perhaps the foremost scholar of Calhoun of our time says of the man:

“Calhoun was a major figure very near the pinnacle of American statecraft for forty years. His influence, though never dominant, even in the South, was Union-wide. It was largely moral and intellectual and extended to many more subjects than the sectional conflict. Which is why ambitious politicians of all parties hated him and attempted to reduce his standing by cheap ridicule which some historians continue to retail. Several writers have put forth the proposition that a statesman differs from a politician in that a statesman perceives the long-range consequences of actions, lays out for a society its real alternatives, and, though he usually goes unheard, warns of future dangers. By this rule, Calhoun was indeed a statesman. All politicians and many historians imagine that nothing exists higher than a politician.” [17]

[6] The name Colquhoun comes from the Gaelic place name “cuil cumhann” meaning “narrow corner”. The location of Colquhoun (pronounced “ca-hoon” with the accent on the second syllable) is on the western shores of Loch Lomond. Umfphredus de Kilpatrick was granted the lands by the Earl of Lennox in the 13th century, during the reign of King Alexander II. He adopted the surname from the name of the area. Initially, he lived at Dunglas castle, which was not far from the royal Dumbarton Castle. Later, the Colquhouns became the keepers of that castle.