On April 1, 1850, Rep. Isaac Holmes of South Carolina rose painfully from his seat in the U. S. House of Representatives to make a brief statement.

“Mr. Speaker,” he intoned, “it becomes my solemn duty to announce to this House, the decease of the Honorable John C. Calhoun, a senator of the State of South Carolina. He expired at his lodging in this city, yesterday morning at 7 o’clock. He lives no longer among the living, but sleeps the sleep of a long night which knows no dawning.”

The Great Nullifier was dead. A man of enormous ability, Calhoun was, and perhaps still is, South Carolina’s most distinguished son. One cannot help but think that had he devoted his political skills to preserving the Union, rather than championing “state’s rights” and slavery, he would have realized his presidential ambitions and, vastly more important, spared his beloved South and the nation the horrors of civil war.

Born in 1782 of wealthy parents in Upstate South Carolina, he was schooled in the North at Yale College. He read law in Connecticut, and returned to his home state to establish a successful practice. He was elected to Congress in 1811. Six years later, President James Monroe made him secretary of war, and he later served as vice president under John Quincy Adams and Andrew Jackson. (The latter famously threatened to have him hanged.) He resigned as Jackson’s vice president to take a Senate seat from South Carolina. President John Tyler named him secretary of state. He later returned to the Senate and until his death was the South’s most powerful defender.

News of Calhoun’s death reached Charleston by the new telegraph, and as word spread, church bells tolled in the city and would continue to do so throughout the day. On public buildings and on ships in the harbor, flags were lowered to half-staff.

In Washington, a committee of six senators was appointed to accompany Calhoun’s body to his home state. The journey began a few weeks later. His heavy iron casket moved by rail to Wilmington, North Carolina, where it was placed on board the steamer Nina.

The ship arrived in Charleston on April 25 at Smith’s Wharf, where it was met by a military escort commanded by Capt. A.M. Manigault. The sarcophagus was with difficulty lifted from the steamer’s deck and placed on a large funeral car modeled from an engraving of one built for the Emperor Napoleon. The car was drawn by six black horses, each attended by a groom.

The procession, moving slowly to the beat of a muffled drum, made its way from the wharf to Citadel Square, where the remains were formally delivered to the governor of South Carolina. A eulogy was delivered by the chairman of the appointed Senate committee.

Then began what was surely one of the most remarkable parades in Charleston history. Organized in 10 lengthy divisions representing nearly every military, professional, scholastic and social organization in the city and state, each commanded by marshals and accompanied by marching bands, the parade snaked through city streets to a black-draped City Hall. Shops, public buildings and private homes along the route displayed black crepe on doors and over windows. Citizens who were not part of the huge procession stood with bowed heads along the entire line of march. Some held draped portraits of Calhoun. Others cried out in anguish when his funeral car came into view.

Calhoun’s great iron sarcophagus was laboriously carried up the steps of City Hall and put on display in the Council Chamber. The next morning, Calhoun’s remains were placed in a temporary vault in the west cemetery of St. Philip’s Church.

Except for a brief removal and secret reburial during the darkest days of the Civil War in an unmarked grave in St. Philip’s east cemetery (there being fear the remains might be despoiled by an occupying Union army), all that was mortal of John C. Calhoun would remain until this very day in his “temporary” west cemetery vault. 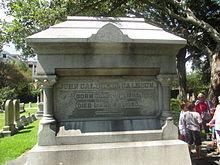 R.L. Schreadley is a former Post and Courier executive editor. He is the author of “Valor and Virtue, the Washington Light Infantry in Peace and in War” from which much of the above is taken.

Originally published in The Post and Courier, Charleston 1st March 2019