What is a Paleocon and what do they believe?

Paleoconservatism* is a political philosophy and variety of conservatism in the United States stressing Christian ethics, nationalism, paternalism, regionalism, and traditionalism. Paleoconservatism’s concerns overlap with those of the Old Right that opposed the New Deal in the 1930s and 1940s as well as with paleolibertarianism.**

[…] “paleoconservatives press for restrictions on immigration, a rollback of multicultural programs and large-scale demographic change, the decentralization of federal policy, the restoration of controls upon free trade***, a greater emphasis upon economic nationalism and noninterventionism in the conduct of American foreign policy”.

This was and is a mostly accurate description, with the exception of;

*A person with a paleoconservative worldview, by definition, does not adhere to an ideology, therefore, the use of -ism, if one conflates ideology to -ism, is incorrect. However, with the caveat and understanding of what we are talking about when we say ‘Paleo’, adding the -ism makes perfect sense.

Thomas Fleming, described  the notion or Paleo as an ideological movement thusly;

When asked about my conservative “creed,”  I usually gave the one word answer “Nicene.”  Finally, when asked about my part in the movement, I had to explain that the only movement to which I adhered was the Christian religion.  And, if I weren’t a Christian, I suppose I should be some kind of Aristotelian.  The whole idea of joining a movement and signing declarations and manifestos filled me with horror.  –Fleming

(**Libertarianism and Paleoconservatism split, for most paleos in the early to mid-2000s. Separating economics from social issues and permanent things is anthesis to a paleoconservative world-view.

***Free Trade or tariffs are tools, situational, not foundational. The Paleoconservative seeks to conserve the permanent and important things of culture. There exists no authentic dogma in authentic paleoconservatism related to economics and trade.)

Wikipedia also lists only three organizations as being paleoconservative, Intercollegiate Studies Institute, Chronicles and *The American Conservative. Of the other organizations, they list many are defunct or primarily single-issue organizations that the Wikipedia editors deemed appropriate to throw in the mix. There is a great propensity to categorize anything paleoconservative as “white nationalist” and therefore “racist”.  This is a problematic accusation at best. Paleoconservatism is in opposition to much of classical liberalism, being so out of step with the mainstream invites ostracization, accusations, and misunderstandings. Many conflate opposition to classical liberalism as opposed to freedom, this is a misunderstanding from ignorance. To the list above we would add, The Imaginative Conservative and The Abbeville Institite.

(*The American Conservative has in most repsects, long abandoned traditionalists and paleoconservative principles and has instead hired many straussians and in many cases, adopted ideological stances that are askew with the old-right)

For the same reason, the mainstream is so quick to throw any organization that appears to be racist into the paleo camp, Wikipedia lists Alex Jones as a paleoconservative journalist – that is preposterous, not even worth disproving.

Paleoconservatism is complex, a philosophy rather than an ideology, it is without dogma and set rules. There are but few dividing lines that separate paleoconservative thought from what others might typically call conservatism, only a few, but they are high walls to cross.

Contrast the minuscule number of paleoconservative organizations, only three that cover the entire breadth of politics and culture, to the almost innumerable neoconservative, Straussian, and establishment Conservative, Inc. organizations. In short, paleoconservatism is a small voice, it is misunderstood, ostracized, marginalized, slandered and ignored.  It is hampered by its intellectual complexity, and the propensity of many paleoconservatives to see themselves a remnant, unwilling to engage and dialogue with others of like mind, but rather to figuratively stand on soapboxes yelling “NO”.

Paul Gottfried, a man that helped coin the term ‘paleo’, describes it thusly,

paleoconservatism is, or was—among other things—a “political stance.” Its representatives resisted neoconservatism and assumed positions that were in opposition to those of its influential opponents. But they also drew on older conservative thought, going back into the interwar period, which incorporated both European and American traditions of thought. Paleoconservatism was the last recognizably rightist form of the conservative movement, if we exclude some Alt-Right bloggers who, although occasionally worth reading, hardly form a coherent movement. It was precisely this rightist gestalt that has made the paleoconservatives and their efforts to represent the Old Right so profoundly distasteful to Conservatism, Inc.

These holdouts have never accepted equality as a “conservative” principle; they continue to believe in traditional gender distinctions and are not especially bothered by the hierarchies that existed in pre-modern communities. They also make faces when they hear the vague platitude “human rights”—what Richard Weaver called a “god term”—thrown into a conversation. Although paleos believe in universally applicable moral standards, they insist that rights are historic and attached to particular societies with their own histories. Paleoconservatives also believe the U.S. was founded as a “constitutional republic,” not as a “liberal democracy.” Perhaps most controversially, they stress lines of continuity extending from the civil rights and immigration legislation of the 1960s to the cultural and political transformation of our country that is now going on. Often attacked as racists or xenophobes, the Cassandra-like paleos are neither. They have boldly pointed out developmental connections that others choose to ignore.

A philosophy and worldview that:

The overarching philosophy is just that simple. Yet it is complex and nuanced. In the modern political drama of red team versus blue team, people are often divided by where they stand on an issue. A paleoconservative understands why he stands on a particular issue in a particular way in a particular circumstance. To the paleoconservative things that protect families, nurture culture, respect the wisdom of tradition and promote societal order are good. Tariffs could, therefore, be good today, and bad policy ten years from now. There is no dogma of what to for a paleoconservative, there is only first principles, universal truths and why.

Here are some examples, to a paleoconservative;

These seem, to many, to be trivial, unimportant historical matters. These make no difference to current law or public policy. They are not small to the Straussians, their entire ideology is built around the idea of Lockean natural rights, the centrality of the Declaration of Independence as a ‘founding document’ and the key role of Abraham Lincoln in articulating an extreme centrist and federalist view of the Constitution. The paleoconservative opposes such a view because it means the destruction of the traditional and consolidation of great power in the Federal government to the harm of the culture, the people and all permanent things.

Abraham Lincoln is another such dividing line, albeit less hard and fast. Some paleoconservatives view Lincoln as a precursor to progressivism and a large central government. Others view him as less harshly.* However, no philosophically grounded paleoconservative views Lincoln in the favorable light the neoconservatives and Straussians paint him in.

No matter what side of the evaluation a paleo finds themself, paleos almost universally agree it is dangerous for conservatism, freedom, and tranquility to deify Lincoln or rely upon his vision of incorporating the Declaration of Independence universally and globally.

*But wait you say, Patrick J. Buchanan is a paleoconservative and he certainly sees Lincoln in a different light than described above. Pat has, since 1991, been a strong voice on many issues, approaching them from a paleoconservative perspective. The news media and the internet place the label of paleoconservative upon him. Pat is more complex than a label, it does not fit him perfectly. He came to embrace paleoconservative ideas slowly, and from inside the Republican establishment. Some term him more a populist than a philosophical paleoconservative. This is probably a better description. Pat hit on a stream of conservative thought in 1992, buried and ignored in the Republican party; those thoughts resonated with many. His subsequent campaigns, writing and thinking addressed that unrepresented minority view. Pat came to paleoconservatism more by accident than anything else.  As mentioned previously, paleoconservatism can be complex – and simple.

Simply stated, a paleoconservative believes in tradition, family, and culture and in doing positive things that protect and nurture those things while limiting government where practicable and avoiding the passions and emotions of ideas. A paleoconservative recognizes that our republic began with flaws and those flaws were exacerbated in 1861-1877, but these are now accidents of history, part of our tradition and culture. In policy and principle, the paleoconservative seeks to minimize the negative impacts of those flaws on the things that are important, the things we should conserve.

Paloeconservatism is the natural state of a people endowed with a culture that derived from the British tradition. This includes all Americans that call themselves American, no matter race or creed. It is complex enough to endure great change and challenge and simple enough to solve everyday problems.

*Beyond the inarguable inclusion of Burke and Kirk, Paleoconservatives (Paleo), Traditionalist Conservatives (TradCon), Old-Rightists, etc. will each have a slightly varied versions of who they call influential. The list presented below is but one view of the paleoconservative genealogy of ideas. No matter variations among authentic right conservatives, various list always include both Edmund Burke and Russell Kirk, differences are sandwiched between those two pillars of conservative thought.

See On Old Rightism and Traditional Conservatism by CJay Engel for an execllent example of subtle difference. 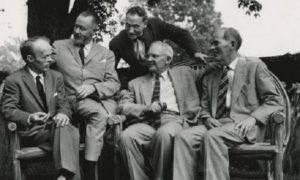 The paleoconservative view is a nebulous point between some of the writings of Thomas Jefferson and John Adams, more Jeffersonian Anti-federalists, more Adams’ inclination toward the social good.

The true paleoconservative view of this split is likely best articulated that ‘the best implementation of Burkean traditionalism would have been centralized power in a decentralized way, in the states – a true form of federalism advocated by many anti-federalist as best to ensure liberty, prosperity, continuity, order and tranquility’.

Last, but not least, Edmund Burke.